My research focuses on wildlife conservation in forests that lie outside Protected Areas. Working in Chittoor district of Andhra Pradesh (India), I plan to explore the social, ecological and political factors that converge to conserve wildlife in forests that have historically played a role in connecting two distinct biogeographic regions, the Eastern and Western Ghats.

My study area is a part of the Eastern Ghats and comprises of scrub and dry deciduous forests rich in both flora and fauna. Unassuming and 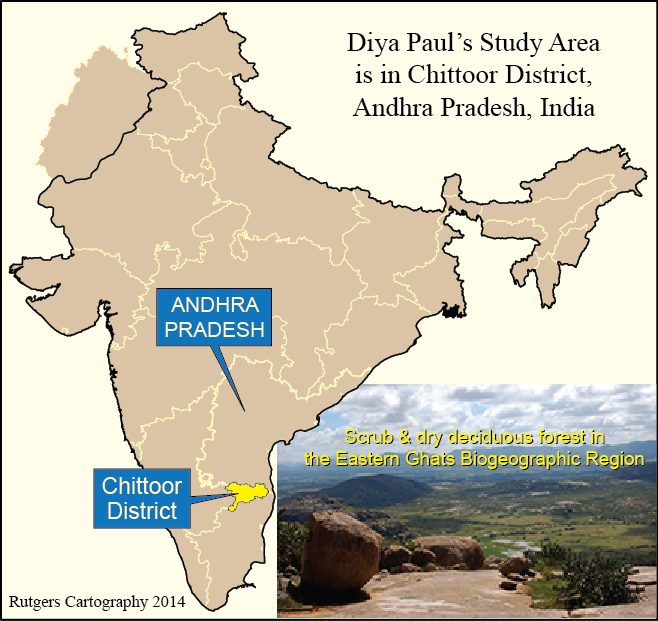 underrepresented, these forests provide habitat to endangered and endemic species like Terminalia pallida, the Four-horned antelope, the Yellow-throated bulbul and the Golden gecko, among others. There are approximately 1300 species of plants with many endemics, over 50 species of mammals and over 1000 bird species. Additionally, a larger percentage of the rural population of Chittoor district in Andhra Pradesh depend upon these forests for fuel wood, non-timber forest products and for grazing livestock. Lying in a predominantly drought prone area with an average rainfall of 650mm, the rural population relies on agriculture (rain-fed or through harvested rainwater), livestock and forests to meet their needs. Over the past two decades, land use practices have been changing rapidly owing to intensive extraction of groundwater, depletion of wetland ecosystems (which have played a critical role historically), granite and sand mining, and construction of new roads.  Despite the increasing fragmentation and minimal conservation measures in these forests, wildlife continues to persist. However, human-animal conflicts are increasing and the lack of attention on these forests by the government and the international community (of biodiversity conservation) threatens the future survival of the populations left in these forests.

Sporadic interventions by the state Forest Department and NGOs have yielded positive results in the past (through afforestation, soil and moisture conservation programs and protection by the communities), but these have been project based short-term interventions. Presently there is no externally driven incentive for the local communities to conserve these forests. A relatively new policy called the Forest Rights Act (2007) which gives forest dwelling communities’ rights to land in the forest, (has been posited as a blessing and a curse) is yet to be implemented in my study area. Through my dissertation research, I intend to examine the impact of changing land use, systems for access and control to forest resources and the effects of changing policies on forests, and wildlife in my study area.