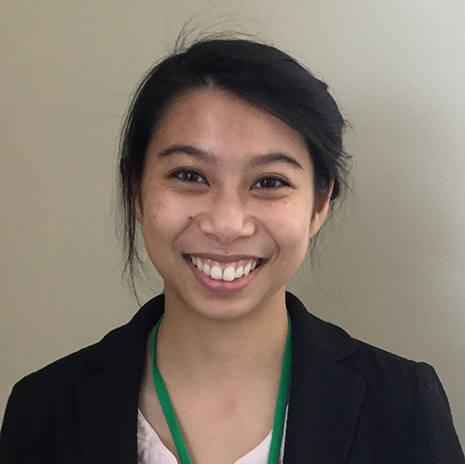 We caught up with Jessica at the 2017 annual conference of the American Association of Geographers (AAG) in Boston. A Rutgers Geography major, Jessica graduated in 2015. A cultural geography class at her community college and some of the introductory courses at Rutgers led her to major in Geography.  Earlier in the day before this interview, Jessica was offered a position with the National Geospatial Intelligence Agency. Here, she talked with Dr. Carrie Mott (CM) about the job search, what she gained from majoring in Geography at Rutgers, and her advice for Rutgers students who are considering a Geography major.

How did you decide to become a Geography major?

When I went to Rutgers, I took Geography 101-103 and I loved it, I was like, “this is going to be my major!” I went for a Geospatial Information Science (GIS) Certificate because I did the Human Geography track [Global Culture, Economics, and Society] and then I realized I could take the last four requirements of the GIS certificate in the final semester so I just did four Geographic Techniques courses in one semester and ended up with a certificate.

How has that certificate worked out in terms of job options?

Well, employers don’t really understand the concept of “GIS Certificate” but it has really helped me when I talk about the things I actually did in the class- like cartography and the GIS final project that I did, which was part of Civic Engagement and Service Education Partnerships (CESEP). CESEP takes someone from the GIS class and matches them up with a nonprofit in the New Brunswick area who needs GIS services. You do that kind of as volunteer work, kind of as a mini internship, so I cite that on my resume as an internship.

What was the work that you did with CESEP?

There are a lot of community gardens in New Brunswick and they’re trying to get people to grow their own food because New Brunswick was determined to be a food desert by a previous GIS student. So they wanted to find habitats for bee pollinators so had to find locations where they could build a habitat for bees, that way they could pollinate all of the community gardens. So I helped do a site suitability analysis for that. So, stuff like that I get to talk about in job interviews. I also did undergraduate research with Professor St. Martin so I talk about that. All the stuff that I did in Cartography, that’s in my portfolio so the maps that I make- people are pretty impressed with them. Even the spatial data analysis class, which is kind of like geography statistics- I use that a lot on the job, just understanding how to manipulate data in Excel and stuff like that.

The job you have now is what you got after you finished at Rutgers, right?

Yeah. I do business analytics for pharmaceutical companies. My company isn’t a pharmaceutical company itself but it does all these services for different pharmaceutical companies. So the pharma companies are our “customers”- for every customer I might make them an expense report to understand how they are doing their budgets, I help them report information to the government. And, of course I do mapping. Whenever they’re promoting a drug or a medical device, they need sales representative to go out to doctors’ offices promote their new product. So I have to make a territory, each territory belongs to a sales representative and decides what part of the US that representative is responsible for covering. So, all the doctors in a certain territory are perceived to be really open to writing scripts for this drug, so that’s how mapping fits in.

So, more recently, what happened here at AAG [American Association of Geographers conference]? There’s possibly a job change for you?

Yeah, so because my job is in the pharmaceutical industry, I’m the only geographer on the team. In a way that’s good because I get to be in a leadership position and I’m constantly able to share my geographic knowledge, but at the same time I felt like I wasn’t getting enough mentorship. I just graduated and I feel like there’s so much more to learn. To combat that idea- like maybe my geography background is slipping- I signed up for a Master’s program and I’m looking for a new job.

You’re currently in a Master’s program? Where?

I take classes online with John’s Hopkins. That’s part time and then I still work full time. So I go to work in the morning and school at night but it’s online so it’s not too bad, I don’t have to commute anywhere. So when I came to AAG, I came with all my resumes to see if there was any job postings and the NGA [National Geospatial Intelligence Agency] had a position open, I gave them my resume, did the interview and they offered me a job!

What about while you were actually at Rutgers? Thinking about students who might be considering majoring in geography- what was your experience like in the program?

Like I said before, I’ve been worried that I haven’t been getting enough mentorship in my job. I think the reason why I missed it is because I had so much mentorship while I was at the department. People like Professor Rennermalm, Professor Leichenko, and Professor St. Martin- they were really great mentors to me. Not just to me individually, but in the classroom, they were always concerned with giving us ideas of like, “what would a geographer do when they left Rutgers?” I feel like they are so close to their students because it is a small department so by the time you graduate you’ve probably had classes with the same professors at least twice so they get to know you and I think that’s really good. They’re just cool people! They’re cool and they’re open and you always feel like you can talk to them about career advice or academics or whatever. The department itself, the professors, I just feel like they’re so knowledgeable. It’s always good to be surrounded by people who are good at their job and more so when they are willing to help you succeed as well.

How about interactions with other students? Did you feel like you were able to get to know a lot of other geography majors?

Yeah- actually I was a commuter, so at first I was just concerned with graduating! I was just so concentrated on school, but after awhile I saw, “hey, I know you, I know you, I’ve had classes with you”- having that small department it’s not just that you get to know the teachers well, but you also get to know the students well. And, being part of RUGS [Rutgers Undergraduate Geography Society], I didn’t go to that many meetings, but going to the AAG [American Association of Geographers annual conference] with them, I really got to know them and I still talk to them today. It’s cool to get to know people who know what you are going through because it’s not everyday that you meet a geographer!

Would you have any advice to students who are considering a major in Geography?

One thing I wish I knew ahead of time was to look at job postings to see what kind of jobs a geographer can get. I was looking a lot at internships, which is what you should be doing- so some advice would just be to look for internships. But also, look at full-time positions, not because you’re going to apply to them but just to see what kind of skills they require and where they jobs are- are they mostly in Washington DC, or California, or New Jersey? I’ve found that a lot of them are in DC, or California, some in the Mid-West and stuff like that. I didn’t necessarily realize that until it was the end of my senior year when I was actually looking for jobs for real. I think it’s good to look ahead and see what kind of skills you should get. I wish I took a programming class, because that seems to be in a lot of job postings, a lot of database management kind of stuff- which you do get to do when you’re learning GIS. Just try to prepare yourself, look at what kind of jobs there are. I had the examples of the professors, the kind of research they do- but they don’t work in the private sector or in the government, which is where a lot of geographers end up finding jobs. So yeah, just exploring what’s out there.

I don’t really have any other questions, is there anything else you want to say?

I really liked the Geography department, I’m so thankful for all the skills that they gave me. I feel like every single class that I went through I’m referencing in job interviews. Sometimes when you are a recent graduate, you don’t have all the skills that they’re looking for because you just graduated, you don’t have work experience. But you can cite things that you do in the classes. Whether you worked with stats for the Research Methods class, or you did a land change analysis for Remote Sensing, stuff like that, I don’t think students realize how legitimate those projects are. You can’t just go into an interview and say, “well, I’ve never done anything before”, because you have! You’ve done so many things in your classes, even if it’s not a techniques course, if it’s a discussion based class, like when I took Geography of Development, even that I feel like it stretched my critical analysis skills and things like that. I think every class has something to offer. You’re constantly building up your knowledge base, so definitely try to get in as many classes as you can. Especially with Rutgers Geography, I feel like I had so many practical experiences. So, I have a poster that I did for Remote Sensing and I have that in my portfolio. I did a PowerPoint for GIS as well and that’s in my portfolio- there’s so much that you can put in your portfolio to show off to employers. When I graduated from Rutgers, I felt like I knew what kind of things I could do, even just with assignments that proposed a theoretical situation- I feel like I understand what a geographer might do. What I liked about the Department of Geography is that it’s not just theory, you learn things that could be used in the future.