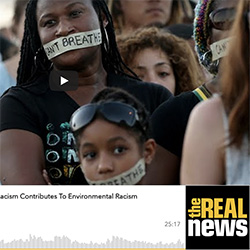 Jacqueline Luqman talks with Professor Willie Jamaal Wright and Eddie Conway about how the many facets of anti-Black racism contribute to environmental racism, and whether enough is being done to elevate this discussion in and for communities of color.

This conversation emerged based on Dr. Wright's 2018 article "As Above, So Below: Anti‐Black Violence as Environmental Racism," published in Antipode: A Radical Journal of Geography. The abstract follows.