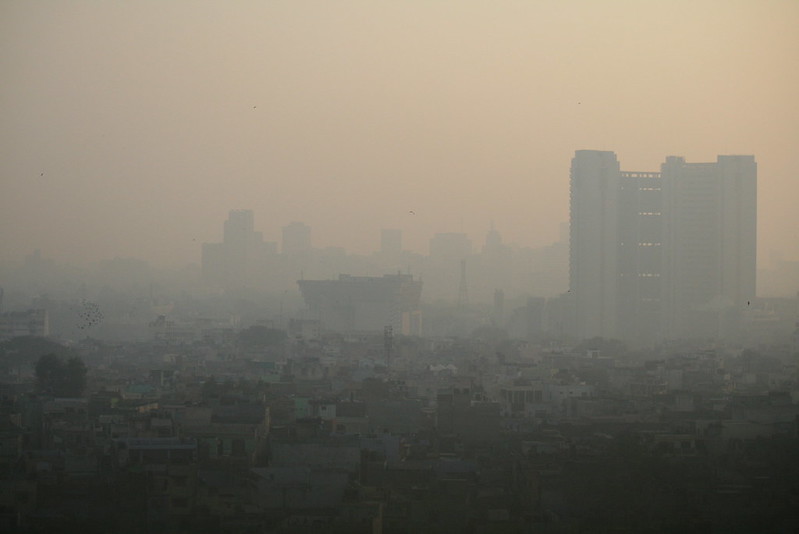 In the newest issue of Economic & Political Weekly, India’s most widely read journal, D. Asher Ghertner, Associate Professor of Geography at Rutgers, explores the history of race and medicine to trace the colonial origins of the claim that Indian lungs are “immune" to air pollution – a claim that has been used to justify air pollution inaction in recent years.

New Delhi, India’s capital city, has been experiencing deteriorating air quality and extreme air pollution events over the past five winters. During these events, the concentration of fine particulate matter (PM2.5) has been more than twenty times above the World Health Organization’s recommended safe limits. The WHO in 2014 ranked Delhi as the most air-polluted city in the world, but Delhi isn't alone: a paper published in The Lancet earlier this year found that India experienced 1.2 million premature deaths due to air pollution in 2017 alone.

India's persistently poor air quality has been understood primarily in terms of governance failure, technological incapacity, or deficient political will. Moving beyond these common diagnostics of urban disorder, without denying their real contribution to the crisis, Ghertner argues in his recent paper that the governance stasis hanging over polluted Indian cities today has been shaped by a colonial epistemology of tropicality. This is evident in the return of an older colonial-era and dangerous theory of Indian “immunity” to tropical dust and pollution, which key government ministries have mobilized to ignore the growing global health consensus about mass atmospheric death their own citizens face.

Drawing on the foundational work of Lundy Braun, a medical historian at Brown University, Ghertner explores how lung science in India has been deeply shaped by nineteenth-century theories of race “differentia.” To this day lung size, measured as vital capacity, is benchmarked to race, the geneaology of which goes can be traced back to Thomas Jefferson’s hypothesis about a race-based “difference in the structure in the pulmonary apparatus." In the first published study on Indian vital capacity that builds on US plantation science positing white pulmonary superiority, it was found that the Indian lung was thirty percent “deficient” vis-a-vis the "white lung." This finding, with minimal focus on environmental or dietary causes, has been reproduced to this day in studies of race-based lung function. It forms the basis on which Indian environmental activists have demanded strict air pollution abatement action, arguing that small lungs are vulnerable lungs.

Drawing on the “fact” of small Indian lungs, key Indian government ministries have argued something quite different, suggesting that Indian lungs are not uniquely vulnerable to air pollution but rather uniquely "adapted" to tropical air/dust. Small lungs, in other words, are somehow less affected by pollution – they claim. These ministries have used the anatomical difference in Indian lung size to challenge the applicability of World Health Organization and Global Burden of Disease (GBD) integrated exposure–response (IER) functions for air pollution—which define the expected increase in death and illness caused by levels of pollution exposure within a population. Ghertner uses these ministries' arguments and testimonies from judicial records to show how the same argument used in the colonial era to submit Indian workers to unshielded “miasmas” now subjects all citizens to a process of slow death by breath. This also normalizes what he calls a “sequestration” model of atmospheric conduct that maintains that the solution to pollution is enclosure – escape into private cars and townships or self-defense through air pollution masks and personal purification systems – not pollution abatement.

Ghertner concludes the paper with a bold call to rethink our relationship with air, noting how the persistence of annual air pollution events suggests something more than bad meteorology or governance. Until the colonial epistemology of tropical difference is undone and the sequestration model of air is undone, bad air will go on confirming India’s tropical “otherness.”

Ghertner worked closely with an advanced undergraduate student, Anjanette Vaidya, to carry out the archival research for this project. Anjanette, who was awarded the Andrew Hill Clark Award in 2019, given to the most outstanding graduating geography major, spent time in the New York Public Library and using online medical archives to piece together the connection between plantation-era lung science in the US South, Rockefeller Foundation efforts to spread western medical technique in the 1920s, and the Indian scientific adoption of racialized pulmonary medicine.